The English Channel was our first attempt to adapt the Vox AC-30 Top Boost amplifier for use as a guitar pedal. Released in 2004, the English Channel was a straightforward JFET implementation that was heavily based on the amp's schematic using the so-called "FET by numbers" approach. While this approach did certainly capture the amp character to certain degree, the overall sound of the resulting circuit was not as refined as its valve counterpart.

Through the years since the English Channel was released, we've been polishing the manner in which the different valve stages used in guitar amps are adapted to JFET-based circuits. This involves taking several aspects into account, such as the effective frequency response of the stage after considering parasitic capacitances, input and output impedances, gain and dynamic range, and clipping characteristics. Furthermore, in some cases we have taken the artistic license to replace certain portions the circuit with something that provides the intended function without necessarily looking like the original circuit.

Now we present Britannia, a fully redesigned adaptation of the AC-30 for use as a guitar pedal which has been optimized for playing into a clean solid-state amp. We hope that you will find this project a nice approach to the sound that was made famous by many artists, including The Beatles, Tom Petty, The Edge, and Brian May, to name a few, without having to invest in or carry around the real thing.

Here is the usual circuit walkthrough for those interested in the savory details: First, Q1 is our standard high impedance input stage, very "booster friendly" thanks to the two red LEDs at the Gate. Next, you will readily recognize a scaled version of the Gain control section, which together with Q2 form a treble booster. You will also notice that all JFET stages but Q2 are prevented from clipping hard by virtue of the back-to-back diodes present at each Gate. This helps retaining the sweetness and dynamics of the sound. However the original amp has some degree of grittiness in it when pushed hard, and this is achieved specifically by Q2, which is a high gain stage borrowed from the Omega booster. Apart from its higher gain, this stage is generous in 2nd order harmonics. Then comes Q3 as a voltage follower driving a slightly modified version of the original tonestack. Some additional gain is provided by Q4, then a cousin of the original Cut control, which in our case was wired backwards with respect to the original, and therefore labeled Brilliance. Next, the op-amp U1a provides the final touch of soft overdrive, followed by U1b that implements the ultimate toneshaping: a 200 Hz resonance characteristic of a 2x12" cabinet and some high frequency rounding.

The following setup procedure describes a possible way of dialing in your tone of choice:

If you would like to use a treble booster at the input of Britannia like Brian May did into the AC-30 Normal channel, we recommend that you start with the following configuration: set the Bass control at maximum, the Treble control at minimum, and the Brilliance control at noon; adjust the Gain control as desired, and then fine-tune the sound to your liking with the Bass, Treble and Brilliance controls. Use of a flat or full frequency booster in front of Britannia will also produce some interesting sounds. 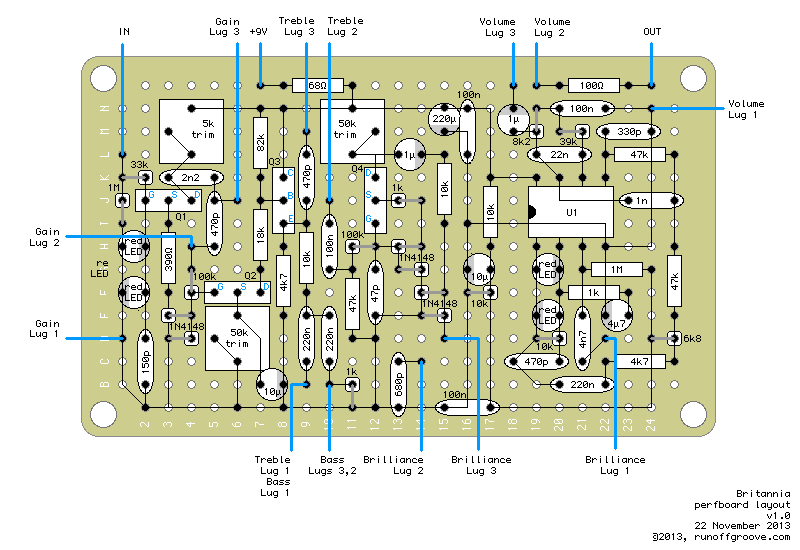 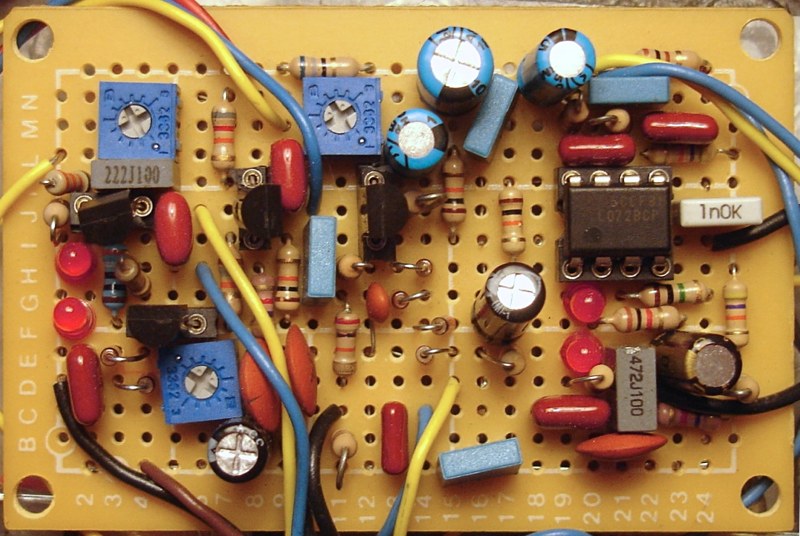 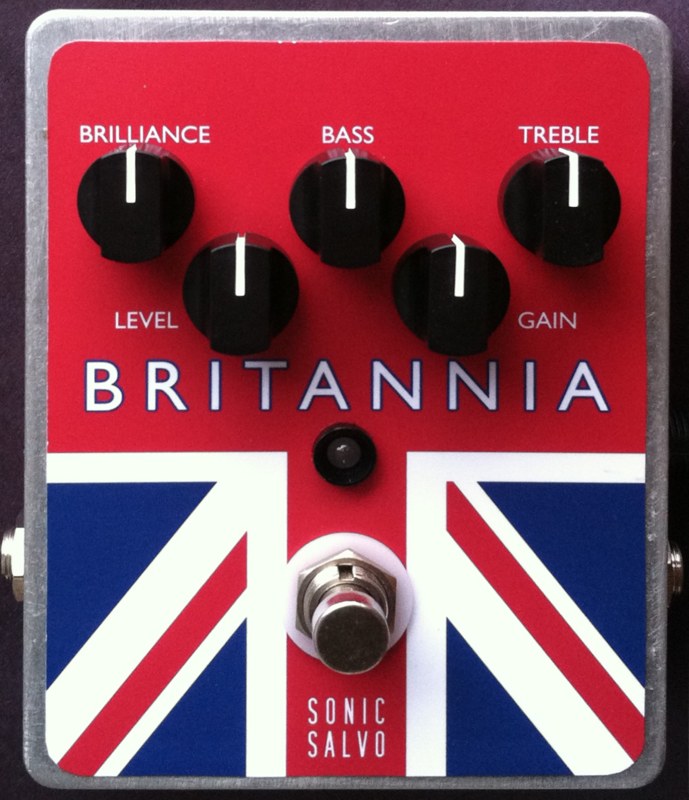 Britannia by runoffgroove.com is licensed under a Creative Commons Attribution-NonCommercial-ShareAlike 3.0 Unported License.
Permissions beyond the scope of this license may be requested.