Thunderchief
The legendary Marshall 100W Super Lead adapted for use as a distortion stompbox
by runoffgroove.com

The search for 'big tube amp tone' in a manageable package has gone on for many years. There have been scores of devices made that claimed to be a stack-in-a-box. Some devices were pretty close, others were just hype. Needless to say, the search goes on.

For many, the holy grail is the venerable Marshall stack sound. It wasn't too many years ago that the Marshall amp was the only amp that could rock so very hard and not mush out on the bass notes. In those times (and many today) the Marshall sound is the 'Sound of Rock.' The mighty Super Lead models were the amps most guitarist in the '80s craved, mostly due to a Dutch-born kid in living in California.

Much study has gone into the Van Halen sound. Most accounts of his setup describe a stock Marshall Super Lead running wide-open into a load box. The load box is used to attenuate the massive power of the 100W head. With this load box in place, he was said to have run the amp with all knobs full up to get an awesome sound. On down the signal chain, a speaker emulation device was said to have been used. After that, came reverb and echo and maybe a few other effects.

Doug Hammond has done incredible work recently using JFETs to simulate highly desired tube amps. Doug's 'Meteor' stompbox has incredible gain and sounds very much like the Trainwreck amp it is modeled after. After studying Doug's work, we decided to try the same technique with the Marshall Super Lead. The goal was to achieve the wide-open Marshall sound.

We chose to omit the tone stack and the associated buffer stage from the Marshall Super Lead schematic for two reasons. First, we wanted the 'all knobs on 10' sound, which makes the tone stack virtually bypassed. Secondly, it makes the build simpler.

The next thing we considered was how to reproduce the speaker emulator of the VH setup. Doug Hammond used dual low pass filters on the tail of his 'Meteor' circuit. We researched the famed Celestion speakers to find their frequency response. We found where the Celestions started losing high frequencies and set our dual LPFs near that frequency. We also looked at the coupling cap on the output stage and set that so it would trim the bass frequencies similar to a Celestion speaker. Finally, we added a 'master volume' control on the end of the circuit to act as our 'load box.'

We named the project Thunderchief.

While Thunderchief does not sound exactly like the famed VH setup, it shares some qualities. There is good focus in the bass frequencies. There is tons of gain. The highs are sharp and clear, but not piercing. Lead playing is effortless. Controllable feedback is there. Touch sensitivity is incredible. It does not mask the sound of a guitar, despite the incredible gain.

Below are the transistor pin voltages from the official runoffgroove.com build.
Fixed resistors were used to approximate the trimpot value, resulting in slightly lower than 4.5V at the drain of each FET. 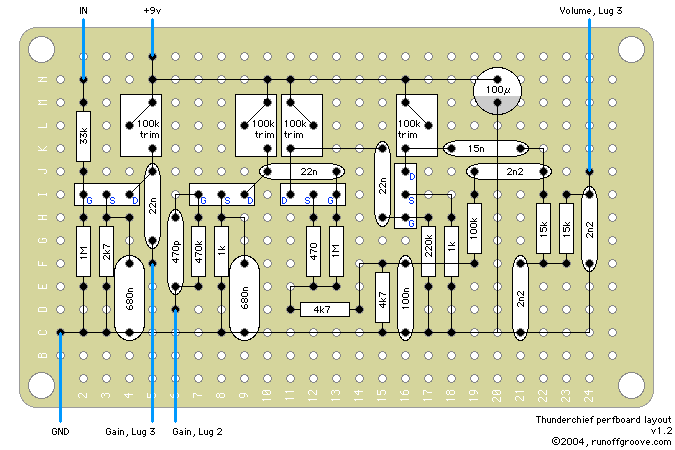 Thunderchief by runoffgroove.com is licensed under a Creative Commons Attribution-NonCommercial-ShareAlike 3.0 Unported License.
Permissions beyond the scope of this license may be requested.